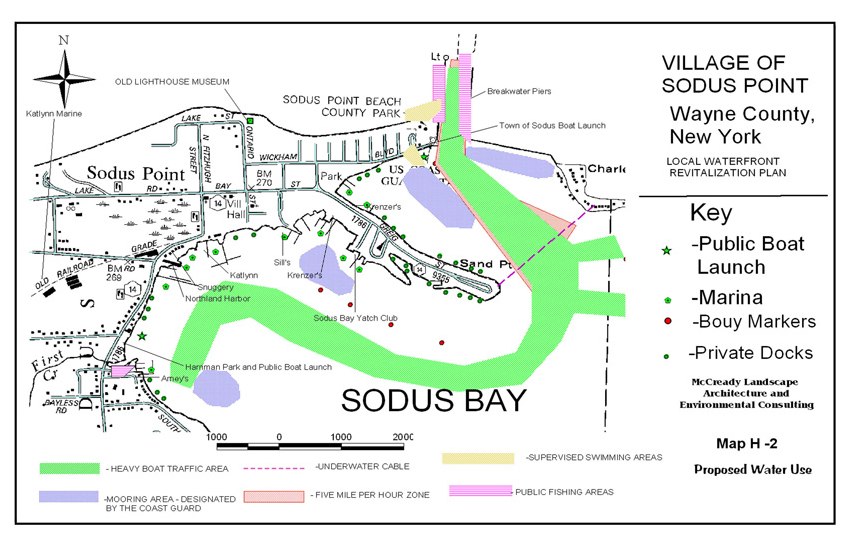 The amendment to the Village of Sodus Point Local Waterfront Revitalization Program (LWRP)has been prepared in cooperation with the New York State Department of State, pursuant to provisions of the New York State Waterfront Revitalization of Coastal Areas and Inland Waterways Act and the New York State Coastal Management Program (NYS CMP). The Village’s existing LWRP was approved by the New York State Secretary of State on December 28, 2006 and incorporated into the State Coastal
The Village of Sodus Point LWRP Amendment incorporates harbor management elements based on the findings and recommendations of the Great Sodus Point Harbor Management Plan. The draft Sodus Point LWRP Amendment does not propose any changes to the local waterfront revitalization area boundary, which is described in Section I of the LWRP, and illustrated on the Waterfront Revitalization Area Boundary Map. The amendment to the Village of Sodus Point LWRP consolidates and implements the State’s existing 44 coastal policies into 13 policies, including specific policy standards, as they apply in the Village. There are no substantive changes to the 44 policies of the NYS CMP. Comparison and references to the applicable forty?four policies are provided in each of the following explanations, as well as in a summary table, which follows.
Download the Public Notice with full amendments.
Download the entire LWRP
Sections: