The benefits to our community in building a new Village Hall at the former Bait Shop site include:

Downtown Sodus Point will be a welcoming commercial district and four-season activity hub nestled at the heart of the village waterfront.  The pedestrian scale and cohesive appearance of the buildings and landscape will complement the traditional village setting and history while cherishing the beauty of the waterfront location.  The mix of restaurants, shops, water-related and other businesses, and recreational activities will contribute to the enjoyment of the waterfront, providing an engaging atmosphere for all visitors while respecting and supporting daily life of village residents.

Why do we need a new Village Hall?

The need for substantial repairs or replacement of the Village hall has been a board discussion for several years. The inefficiencies of the existing building combined with the need for significant maintenance were both parts of the discussion.  It was clear that investment would need to be made to both maintain and enhance the existing building.  In consideration of the expected investment, alternative solutions to relocate were also considered.  In the fall of 2016 the Village began to explore several potential sites around the Village.  Some sites explored at that time were:

Once recovered from the flood of 2017, the board decided to take action on the Village hall. Identifying the first step needed was a professional building assessment by an engineering / architectural firm.  Bids were received and Edge Architecture was selected based on their prior work experience and estimated cost. Their report can be found here:  https://soduspoint.info/village-hall-feasibility-study/

The report identifies structural deficiencies, aging systems that are due for replacement, lack of ADA amenities, and inefficient use of the overall space for the current needs of the Village Hall.  The cost of improvements is high but address repair, replacement, and upgrades necessary to use the building as a public and government facility to maintain the capital asset.  With that comes a high cost of renovation of which is necessary and impending. It was no longer an option to just wait.  In the summer of 2018 the board again sought bids from companies to assist in a site selection and design process. Edge Architecture was selected based on both experience and contractual costs.  There were several additional sites around the Village identified; many owners were contacted to explore availability.  Five options were presented to the board:

Option 1A – New building on the existing site

The matrix with estimated costs, pros/cons and notes can be found here:  https://soduspoint.info/village-hall-site-selection-matrix/

It has been my goal as a trustee and as Mayor to not accept plans as a final submission.  Plans developed over the years have cost the Village taxpayers thousands of dollars only to be shelved and left to collect dust.  I recognize these efforts are developed for a reason. In a review of the four Village plans that have been developed over the past 20 years, they all identified the need for a public pier of some type.  The adopted Local Waterfront Revitalization Plan (LWRP) suggests it should be large enough for at least 10 boats and be located in close proximity to the business district.  It also calls for a pedestrian promenade.  The Harbor Management Plan calls for a public gateway into the village for boaters.  The Sodus Bay Waterfront Initiative Report suggests the south side of sand point might be the best place for a public pier.  The Downtown Vision Plan discusses methods to improve the appearance of and provide public access to the waterfront to the east of the ball field.  It also calls for improvements to boater access to the business district to promote commerce. All plans reflected a vision for a healthy downtown environment as the key to a strong community.

After review, it became clear to me that given the need for a new Village hall and the desire to get as much value out of a project of this magnitude as possible, serious consideration should be given to acquiring one of the two currently available waterfront sites.  Both of these sites appear to meet the goals of the Village Vision plans.  Selecting one of the sites would both provide an adequate village hall and complete some of the visions identified by the public within these plans.  The Harbor Winds site has

deep water and great docks but no easy access to the business district. The Bait Shop is in the business district and it is one of a few properties around the village that needs revitalization and could serve as the gateway from the water to the village.  The acquisition cost of each property is similar, with North Winds being a bit higher. The construction costs of the Bait Shop site are the high, but consideration needs to be given to the fact the site addresses far more goals and recommendations from the village plans. It also addresses a property that has been vacant for a number of years with no successful interest/purchase.  The tax impact of taking either property off the tax roll is similar. The impact to the Village at the Bait Shop site is a reduction of $1,650 annually. The total revenue reduction is approximately $14,000 combined to Village, Town, County, & School. There is however an opportunity for the Village to put a portion of that site back onto the tax roll. (See next section)

Adding this property to the village rolls expands the green space and park-like environment to the waterfront.  This will provide access to the water for the public as well as serve as a welcoming port for visitors.  The visitor center is located within this overall space.  Everything a tourist is looking for in within sight and easily accessed.  The green represents the proposed new property; the orange represents the portion to be used for commercial development. 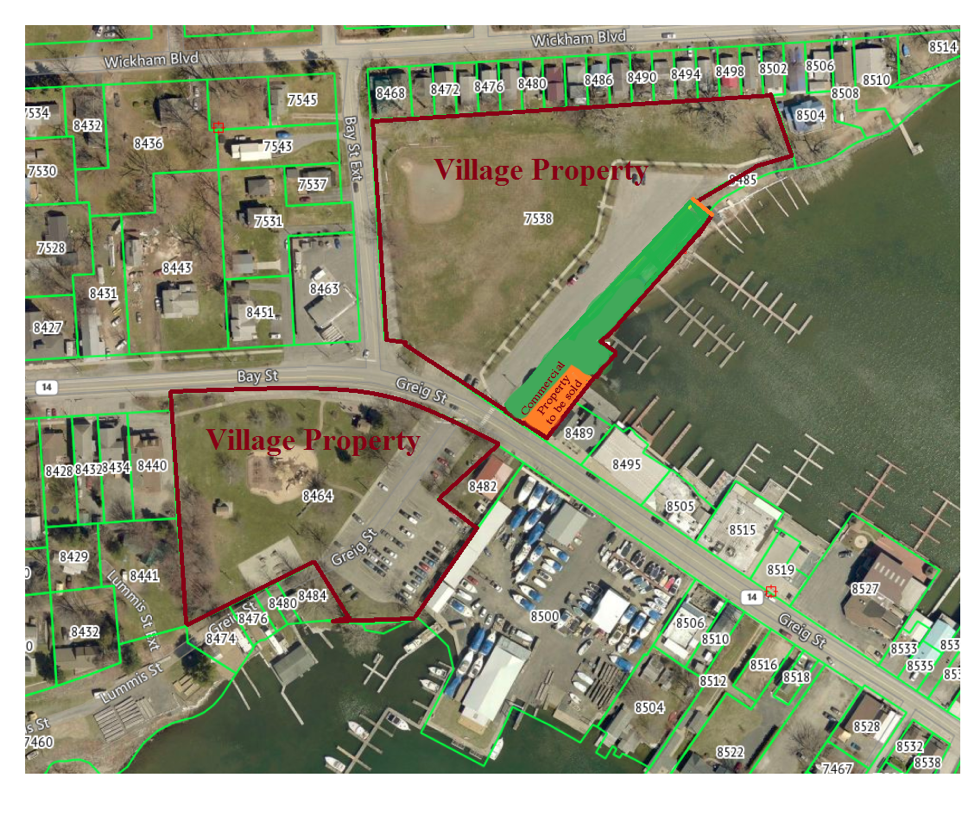 The Bait Shop site can not only be revitalized, but offers 28 new public parking spots, 10 public docks, and public access to the waterfront and is the best option for the Village to accomplish several community goals and address the Village hall needs in an affordable manner. It is also envisioned that the site could be stimulated with additional commercial investment.

Getting money back from the site; cost justification

The Village plans to sub-divide the existing Bait & Tackle Building into a smaller individual parcel so that it can be utilized as a commercial site; adding it back to the tax base and creating a more economically viable purchase for a business or developer to acquire. Alternatively, the village could lease the space to commercial businesses, creating a new revenue stream for the Village.  The Village would issue a request for proposals for a developer/buyer to acquire and develop or re-use the site.   There are currently a couple of developers who have expressed some interest in the site. A specific proposal, including a timeline, would be expected from any interested party.  Another alternative discussed at a workshop was the idea to demolish the building and create outdoor green space with seating and an open-air market for vendors to lease space seasonally.

What will be built?

A freestanding 1.5 story 2,665 square foot Village Hall is proposed.  This is similar to the 2,500 square foot space currently used.  The new village hall would be built at an elevation above the flood plain.  The building would be built with current construction technology and building systems that will be more energy efficient, offer universal accessibility and offer public access and views from both the building and site to the Great Sodus Bay.  The main floor will have an adaptable boardroom/classroom/meeting room, ADA bathrooms, a public restroom accessible from the outside, and the office space needed for the village staff.  Storage will be accommodated at the upper level.  The site will be designed to frame views of the waterfront as well as plan for future consideration of a boardwalk.  The existing municipal parking lot will be cleaned up and striped, and some landscaping will be added to create a more inviting park-like appearance.  The building will be sited behind the existing bait shop building starting at the approximate location of the existing freestanding storage building.

View of the proposed building from the west: 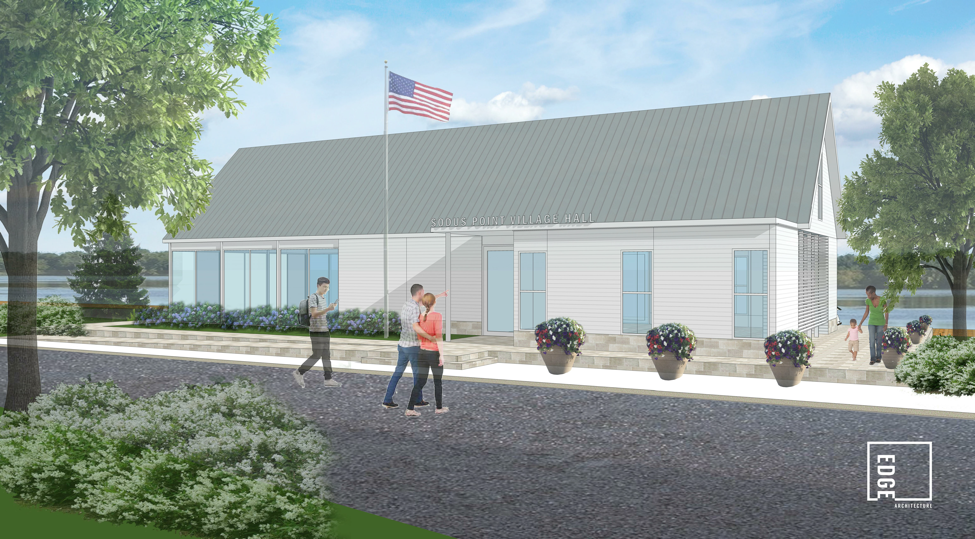 Scale view of the building from Bay Street 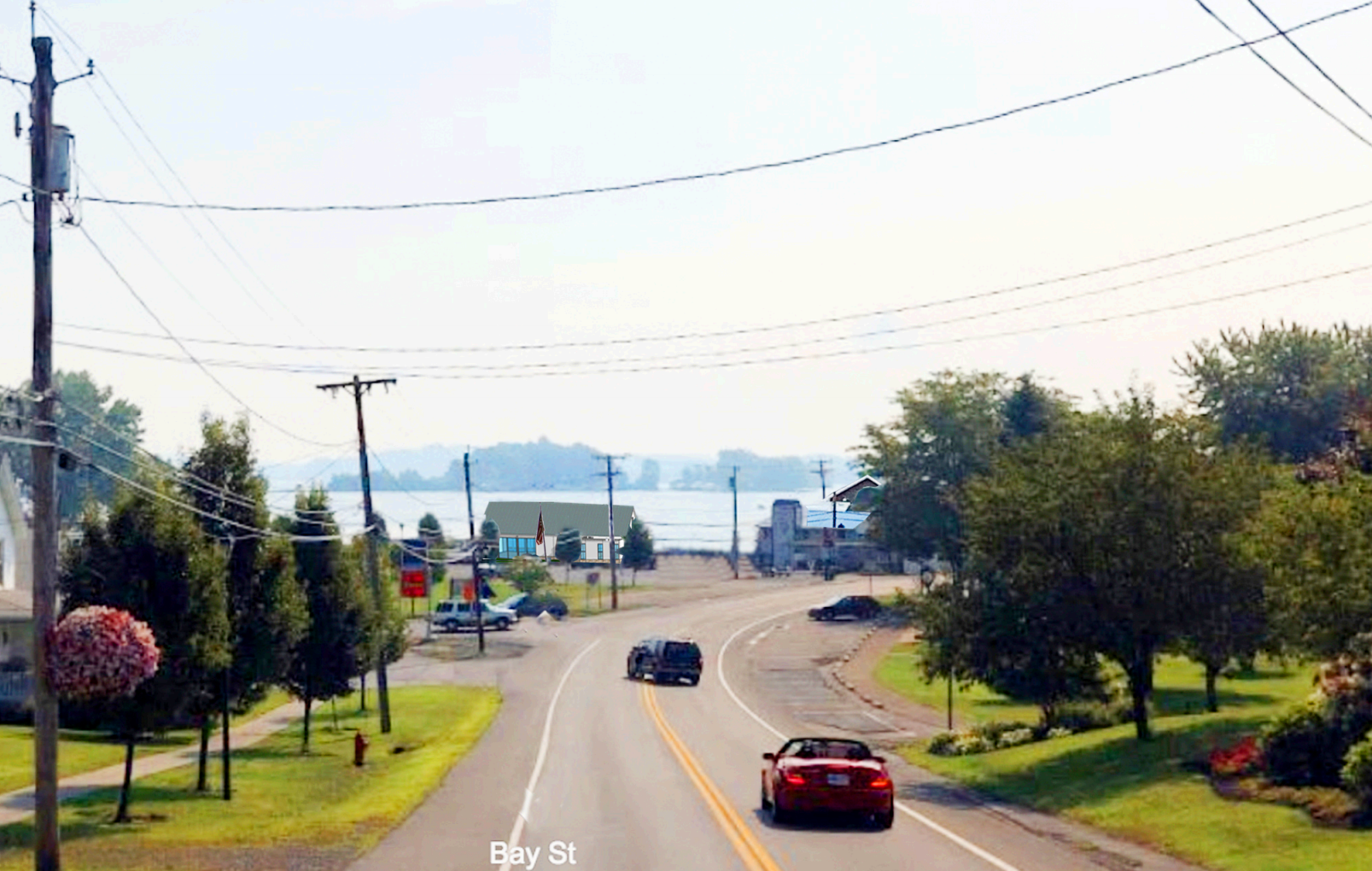 The board began the financial planning for such a project several years ago.  The building maintenance account was increased as a way to set some money aside until a plan was developed.  This has created approximately $300,000 in cash is available for the project.  We also expect to gain some additional cash by selling or leasing the existing village hall and the commercial portion of the bait shop property.  Those monies will be used to fund portions of the project.

We have met with our bank, the USDA and bond counsel to determine the best way to finance the project.  At this point, the best option will be to bond no more than $1.3M over 30 years.  Money to repay that bond is already built into the current village budget.  The specific details regarding the bonding will be managed and coordinated by the village bond counsel. 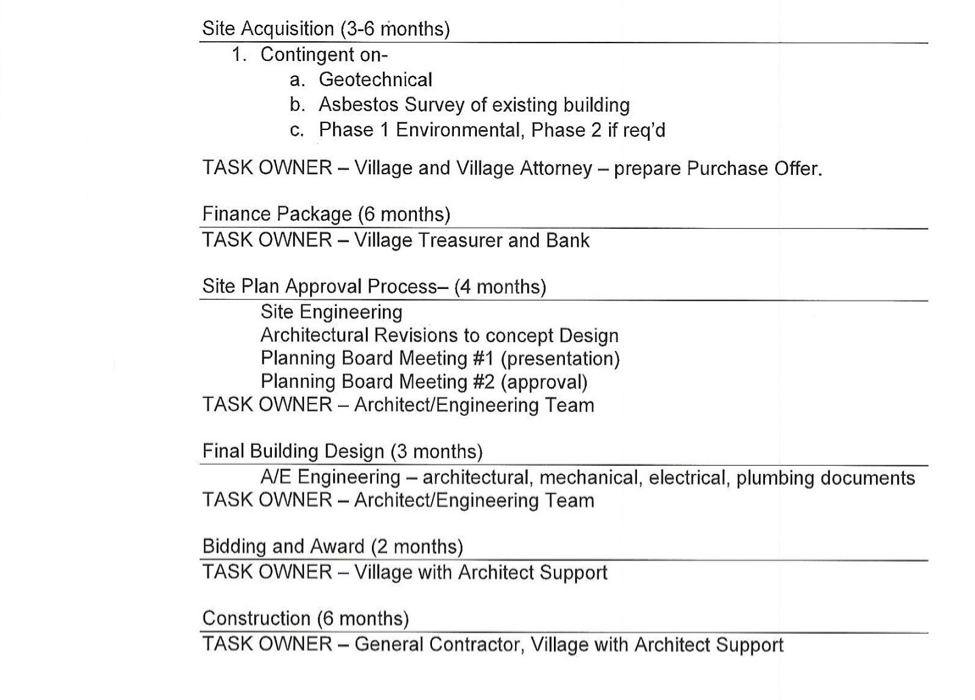 Many of these steps will overlap; overall this appears to be a 12-14 month project.

Since this is such a large project for the village a citizen advisory group has been set up.  This small group of village residents, with construction, engineering and commercial building experience will assist the village in managing the project.  They will participate with the trustees and the mayor in meeting with the architects and engineers during the design phase.  They will also review the construction bids and participate in selecting the contractor(s) and monitoring the construction phase.

The costs of the Design and Engineering phase break out as follows:

There is also approximately $23,000 for testing and inspections prior to, during and after construction.

The project will include shoreline protection for the entire 305 feet of the parcel. Specifically, what will be determined during the design and engineering phase of the project. The project also includes the patio depicted around the building, paving around the project area and 625 sq. feet of new sidewalks as well as some landscaping. Excluded from the project are a boardwalk, any dock replacements and acquisition of the dock lease held by Art Lyman. Money for a boardwalk and new docks, if desired, would be accomplished in the future thru various grant resources.

What happens to our current village hall?

The first preference is to sell the building to an interested developer.  One developer has talked about turning it into apartments.  Another group is exploring the feasibility of recreating Guild Hall.  We have also reached out to the Alfred State University Architecture Program.  They are considering sending a team of students and a professor on site in April to review the village hall and provide some alternate use ideas we could pitch to developers.  If we are unsuccessful in selling the building we would first try to lease it.  If that is not successful, we would likely have it razed, salvaging the timbers that makeup parts of the building.  In no case would we leave an empty building for an extended period of time.

We are attempting to get these fixed.