History of The Village

In 1794, the village was the site of the first European-American settlement in Sodus town. Before the American Revolution, the area for centuries had been the territory of the Onondaga Nation.

During the War of 1812, the village was burned by a British raiding party, leaving all but one building demolished. The village was rebuilt. 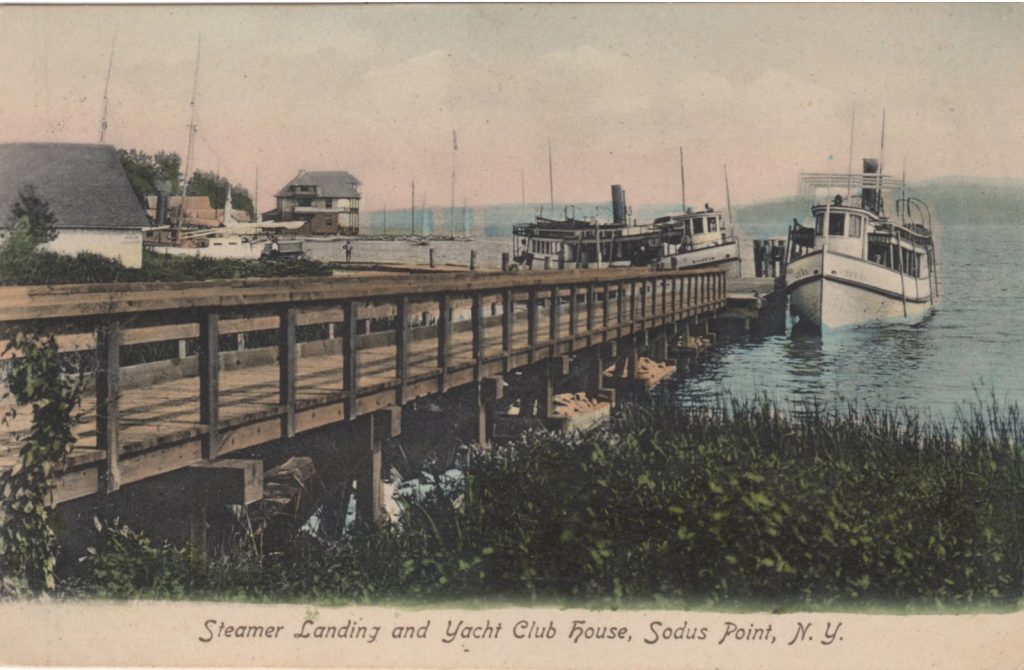 Postcard of Steamer Landing in the Village of Sodus Point

Sodus Bay became an important port on Lake Ontario in the 19th Century. Sodus Point was a central shipping point for coal, which was brought by rail from Pennsylvania. An immense loading dock or trestle was built on the east side of the bay, and great ships stopped from all around the world to load up on coal as vessels moved out onto the Great Lakes. The trestle was one of the chief landmarks of Sodus Point. It was said to be some 600 feet high & extended far into the bay. Built in 1927 and while being dismantled because of decreased use of coal for power was destroyed by fire in 1971.

Later on, when the Erie Canal was built, there were plans to connect Sodus Bay to the canal, but after much debate the plan was abandoned. As the Erie Canal shifted state transportation patterns, the village’s function as a port declined.

In the later 19th century, it became a popular vacation resort, especially for people from Chicago and other cities during the summers.

The village was incorporated in 1958.

The Village of Sodus Point historian is Tom Lightfoot.

For more history of Sodus Point visit  historicsoduspoint.com   run by Bruce Farrington, Bruce has down an outstanding job of archiving historical information.

Brush and leaf Collection may be required past the final scheduled date as determined by department head, however all collection ends on Friday, November 29. Christmas tree collection upon request.